Mexico’s peso is headed for choppy waters in what remains of 2019 as the ongoing U.S.-China trade war and the uncertain fate of the new North American trade deal could cause the currency to fluctuate between 18.80 and 21 per dollar, analysts say.

The peso’s immediate future ultimately depends on whether the world’s two largest economies can resolve their trade dispute and if U.S. lawmakers ratify the new U.S-Mexico-Canada (USMCA) trade agreement before it gets bogged down in the U.S. electoral politics.

The Mexican peso could fall almost 9% to 21.30 per dollar next year if U.S. President Donald Trump again threatens the country during his re-election campaign, Mexican financial group Banorte said on Tuesday.

Trump has repeatedly sent the Mexican currency and stock market tumbling after attacking Mexico over immigration and trade, mostly on Twitter, threatening to impose tariffs on Mexican goods or close the countries’ shared border.

Mexico’s peso and stock market slumped on Wednesday in response to an impeachment inquiry against U.S. President Donald Trump, with trade experts warning the probe risked derailing the passage of the USMCA trade deal through U.S. Congress.

Mexico’s peso MXN= slipped 0.9% versus the dollar to an almost three-week low against the dollar and the benchmark stock index .MXX fell 1.24%, with banks citing the move against Trump by Democrats on Tuesday as sapping investor appetite for risk.

Mexico’s government has unveiled what it called a “realistic but conservative” 2020 budget that targets a 2 per cent rise in economic growth and a wave of social spending, but analysts warned that some of its key assumptions were too optimistic.

Arturo Herrera, finance minister in the leftist administration led by President Andrés Manuel López Obrador, acknowledged a difficult international outlook had forced officials to rework their calculations after an escalation in US-China trade friction led to a weakening of the peso and oil prices. But he stressed that he was not increasing taxes or debt and insisted in his presentation to Congress that the budget was “very, very responsible”.

As central banks across the globe cut interest rates, Mexico’s policymakers still have room to lower borrowing costs by as much as 100 basis points before the peso becomes less attractive than other currencies, fund managers and financial analysts say.

The spread between the key interest rate in the United States (2.0%-2.25%) and that of Mexico (8.0%) stands at 600 basis points, the third highest in the world after Argentina and Turkey and its highest level in a decade.

Mexico’s peso is falling victim to increasing global trade tensions and will likely struggle in the near future, only a few months after the currency was spared from the impact of direct U.S. tariffs, a Reuters poll showed.

The peso MXN= is expected to trade at 19.66 per dollar in one year, 0.4% weaker than July’s survey and 0.2% softer than its intraday value on Wednesday, according to the median forecast of 17 analysts polled Aug. 2-6.

Before stepping into his daily crack-of-dawn news conference, Andres Manuel Lopez Obrador tends to ask advisers for an update on how the peso is doing.

Pretty well, has been the answer lately. But Mexico’s currency is just about the only indicator that’s delivering good economic news to its president.

The Mexican peso dropped against the U.S. dollar on Tuesday after Mexico’s finance minister, Carlos Urzúa, stepped down from his post. 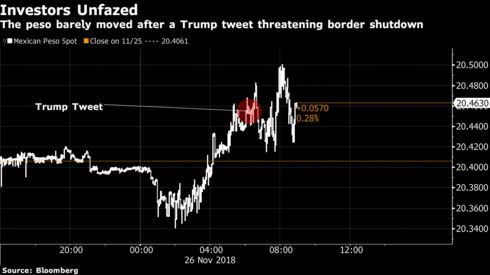 By George Lei and Justin Villamil

What if the president tweeted and nobody cared? That’s pretty much what happened on Monday, when Donald Trump’s declaration that he was prepared to permanently shut the U.S. border with Mexico provoked little more than a blip from peso traders.

Yes, the peso fell against the U.S. dollar on the news — but it dropped just 0.6 percent and then quickly rebounded from the day’s lows. It’s a far cry from the currency’s 8.3 percent tumble the day after Trump was elected two years ago on a campaign that touted plans to wall off the entire border and make Mexico pay for it.

“The border threats don’t have nearly the same market implications that other factors do currently,” said Ilya Gofshteyn, a strategist at Standard Chartered in New York. While investors are concerned about government policy under incoming President Andres Manuel Lopez Obrador, strong fundamentals and the high carry trade are luring some back, she said.

The bank said another rate hike was possible.

The Bank of Mexico lifted its overnight interbank rate MXCBIR=ECI by 25 basis points to a nearly 10-year high of 8.0 percent, as expected by economists. It was a divided decision, with one member calling for a 50-point hike.

Mexico’s peso and the stock market have been rattled by concerns Lopez Obrador’s administration will move away from the orthodox fiscal policies advocated by the central bank.