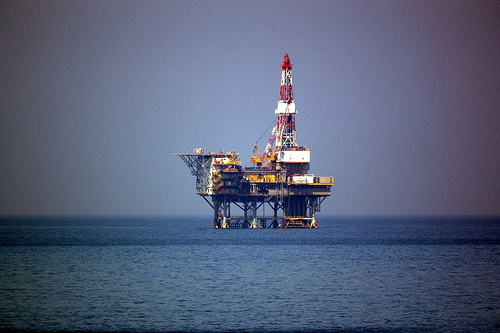 A United States energy company has submitted notices of dispute to the federal government over a decision to take away its control of a shallow water oil field in the Gulf of Mexico.

Houston-based Talos Energy intends to fight the decision by the Energy Ministry (Sener) to designate the state oil company Pemex as the operator of the Zama field, which contains almost 700 million barrels of oil.

MEXICO CITY, Aug 23 (Reuters) – Five workers were killed and six injured in Sunday’s fire on an offshore platform in the southern Gulf of Mexico operated by Petroleos Mexicanos (Pemex) that cut about a quarter of Mexico’s oil production, the company said on Monday.

The fire broke out as crews were performing maintenance on the platform, and a search for missing workers continues, Pemex Chief Executive Octavio Romero told a news conference.

A blaze on the surface of the Gulf of Mexico resembling a large “eye of fire” has been brought under control, according to Mexico’s state-run oil company Pemex.

Orange flames resembling molten lava appeared to erupt from below the surface in videos that went viral on social media, which dubbed it an “eye of fire.” The fire broke out a short distance from a Pemex oil platform.

Pirates attacked an Italy-flagged offshore supply vessel in the southern Gulf of Mexico, injuring two crew members, the Mexican Navy said on Tuesday, in the latest outbreak of robbery and piracy to hit oil platforms and infrastructure in the area.

One of the crew members of the boat, “Remas,” received a bullet wound, and the other suffered a concussion, and both were transferred to a nearby hospital, the Navy said in a statement.

In the calm waters of the Gulf of Mexico, drilling platforms hum away under the sunshine. But, in the dark of the night, they are becoming more and more subject to vicious attacks launched by modern-day pirates.

“Although oil and diesel stealing has been going on for decades, there has been an increase in criminal activity reported in the last four years,” Johan Obdola, founder of the Global Organization for Security and Intelligence, told Fox News. “It is estimated that the stealing in Mexico is up to 1.18 million barrels a day, bringing millions to criminal organizations, and making it very difficult to control.”

Energy companies paid $124.8 million on Wednesday for oil and gas prospects in the largest Gulf of Mexico lease sale ever, but the winning bids fell well short of past sales.

The totals also appeared modest compared with the expectations raised by President Trump in his “America-First Offshore Energy Strategy” that was aimed at substantially enhancing the nation’s “energy dominance.”

Oil companies bid on 148 blocks, just 1 percent of the blocks put up for sale despite royalty breaks the administration provided for some of the shallower areas. The Interior Department’s Bureau of Ocean Energy Management had put 77.3 million acres up for auction.

The Mexican government announced plans Tuesday for an auction of exploration and shared-production rights on 15 blocks of potential oil fields in the shallow waters of the Gulf of Mexico.

The blocks cover 3,440 square miles (8,908 square kilometers) and contain potential reserves of up to 1.58 billion barrels of crude equivalent.

Energy Secretary Pedro Joaquin Coldwell said that the blocks are expected to start producing oil by 2020 and that investment in the projects could reach $11.25 billion over the life of the contracts.

Delegates of Mexico, the United States and Cuba met on Wednesday to discuss the limits of the Western Polygon, an area in the waters of the Gulf of Mexico that has oil and gas deposits but no clear boundaries, two sources close to the discussion said.

Talks about who owns what in the “Doughnut Hole” were spurred after Cuba and the United States announced they would restore diplomatic ties in late 2014.

Mexico’s ruling party lost several bastions in Sunday’s regional elections to the center-right opposition, dealing a heavy blow to President Enrique Pena Nieto for failing to crack down on corruption and gang violence.

The rout will help set the tone for the next presidential election in 2018, underscoring deep discontent over graft scandals and a sluggish economy, and throwing the contest open to contenders from both the left and right.

Early results from gubernatorial races in 12 of Mexico’s 31 states on Monday showed Pena Nieto’s ruling Institutional Revolutionary Party, or PRI, heading for defeat in seven of them, a result far worse than most polls had forecast.

Projected losses included two oil-rich strongholds in the Gulf of Mexico, Veracruz and neighboring Tamaulipas, both of which have been plagued by gang violence for years, as well as Quintana Roo, home to Mexico’s top tourist destination Cancun. All three have been run by the PRI for over eight decades.

LONDON— BP PLC’s fatal blowout in the Gulf of Mexico in 2010 continues to haunt the company, helping to drag its quarterly earnings into a second consecutive loss and overshadowing the British oil giant’s progress on cost cuts.

BP on Tuesday said its earnings took a $917 million hit in the first quarter related to the Deepwater Horizon explosion that killed 11 workers and caused a massive spill in the Gulf of Mexico, a disaster that changed the course of the British oil giant and cost the company $56.4 billion to date.

The additional spill costs and the weakest oil prices in over a decade cast a cloud over BP’s financial performance, despite signs that heartened investors and caused the firm’s shares to jump over 4%.

Counting the Deepwater Horizon costs, BP said its equivalent of net earnings was a $485 million quarterly loss. Stripping out those and other one-time charges, BP had a profit of $532 million in the first quarter, significantly beating analysts’ consensus forecast for a loss of $140 million.

The spill forced the company to sell more than $40 billion in assets, pull back its ambitions and craft the business around a smaller set of high-value oil and gas fields.