Anti-corruption officials in Mexico are investigating the attorney-general’s office in the central state of Morelos after it was accused of covering up the murder of a young woman, Ariadna López.

The body of López, 27, was found by a highway in Morelos last week.

Morelos’s attorney-general’s office said she had choked while being drunk.

But a second post-mortem done in Mexico City concluded she had died of multiple force trauma.

Mexico City’s mayor said the Morelos attorney-general’s office “wanted to hide the femicide, presumably because of links with the presumed killer”.

It took the award-winning author Cristina Rivera Garza decades to be able to tell the story of her sister Liliana, who was strangled on July 16, 1990, in Mexico City.

For years, Liliana had been trying to end a relationship with her boyfriend, who was possessive and violent, according to notes and writings she left behind and subsequent interviews with Liliana’s friends, Rivera Garza writes in her new book, “El invencible verano de Liliana,” which translates to “Liliana’s Invincible Summer.”

Federal funding is ‘an insult given the seriousness of the problem,’ advocates say

At least 80 women and girls disappeared during the 13 days that authorities were searching for Debanhi Escobar, an 18-year-old Nuevo León woman whose body was found late last week.

Escobar was last seen in the early hours of April 9 after getting out of a taxi near Monterrey. Her body was found in a cistern at a motel near the state capital last Thursday. 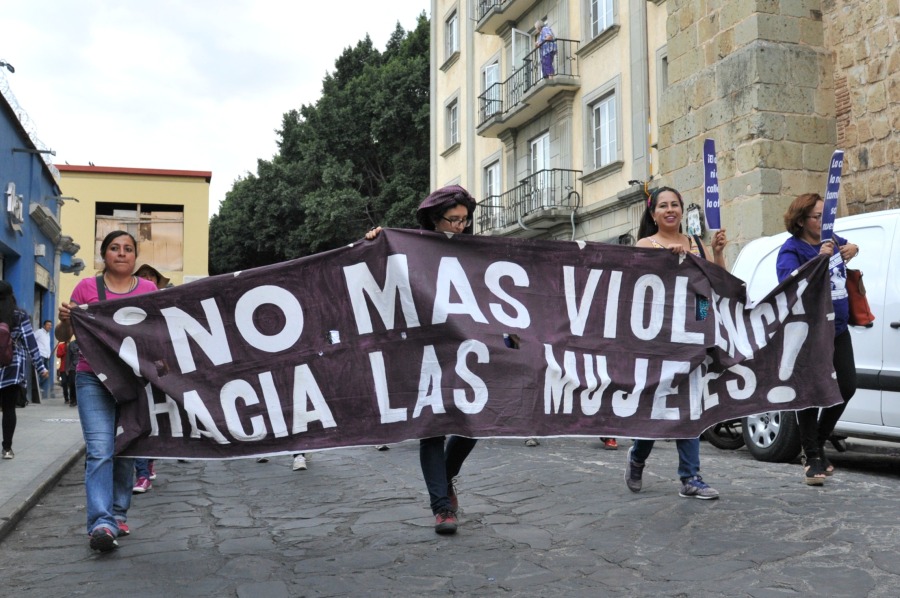 MONTERREY, Mexico, April 19 (Reuters) – More than two dozen women and girls have disappeared so far this year in the northern Mexican state of Nuevo Leon, sparking frantic searches among residents who hope their loved ones have not become the latest victims of endemic gender violence.

On Tuesday, Nuevo Leon Governor Samuel Garcia said that 26 women and girls have disappeared since the beginning of the year and five more have been found dead after being reported missing.

During the news conference in the state capital Monterrey, considered Mexico’s most important industrial city, Garcia said he would increase funding and resources to combat gender violence.

MEXICO CITY — Hundreds of women marched through downtown Mexico City and its suburbs on Sunday to protest the horrifying death of an 18-year-old in the northern city of Monterrey.

Protesters also marched in the rough suburb of Nezahualcoyotl, where two women were killed in the last week. The demonstrators, mainly women, carried signs reading “No to Harrassment” and “Mexico is a mass grave.”

Twenty-six women and girls have disappeared so far this year in a northern Mexican state bordering Texas and five others who were reported missing have been found dead, the state governor said Tuesday. Authorities and families in Nuevo Leon are frantically searching for the missing, Reuters reported, as Mexico continues to grapple with pervasive gender violence.

Nuevo Leon Governor Samuel Garcia told a news conference that authorities and families were searching for the missing people, saying he would increase funding and resources to help combat gender violence, Reuters reported.

At least 10 women and girls are murdered every day in Mexico, according to a new report that says victims’ families are often left to carry out their own homicide investigations.

The scathing report, released on Monday by Amnesty International, documents both the scale of the violence and the disturbing lack of interest on the part of Mexican authorities to prevent or solve the murders.

MEXICO CITY — Volatile protests engulfed Mexico’s capital on Monday as police clashed with thousands of feminist activists calling for an end to what they say is a crisis of violence against women here.

In Mexico City’s central square, known as the Zócalo, police tear-gassed protesters who defaced city office buildings and used crowbars and hammers to tear down parts of a 12-foot-tall steel barrier erected around the National Palace, the center of Mexico’s federal government and the home of President Andrés Manuel López Obrador. Authorities said at least 62 police officers and 19 civilians were injured.