By Eric Martin and Patrick Gillespie

The International Monetary Fund’s board plans to vote on Mexico’s request to renew its flexible credit line, possibly for less than the current $74 billion, before it expires next week.

Mexico is interested in reducing the size now that there’s greater certainty around its trade relationship with the U.S., Alejandro Werner, the IMF’s Western Hemisphere director, said in an interview Wednesday at Bloomberg’s headquarters in New York. Werner said he expects the board’s decision before the current agreement expires Nov. 28.

“We’re investing in refineries. It hasn’t been done for a long time,” President Andres Manuel Lopez Obrador told reporters at a news conference in Mexico City.

Mexican President Andres Manuel Lopez Obrador on Monday criticized the location of Constellation Brands Inc’s planned brewery in the northern border city of Mexicali, in the latest swipe at a major investment agreed before he took power.

The massive, partly-built brewery has been a bone of contention with local protest groups, which argue it will cause water shortages in one of the driest regions of the country.

The Mexican government says a natural gas plant and a wind farm to produce electricity will be the first two projects under a U.S. development program to improve the economy of Mexico’s poor south as a way to discourage migration.

Mexico’s foreign ministry said Wednesday that $500 million of U.S. aid will go to the building of a wind power plant and a liquefaction plant for natural gas. Officials did not say where the projects would be.

Mexico’s telecommunications regulator has opened an anti-trust probe into “relative monopolistic practices” in the sector, the government said in its official gazette on Monday.

The Federal Telecommunications Institute (IFT) probe centers on denial of access, and discriminatory access to an “essential input” in the market for “wholesale disaggregated services of the predominant economic agent’s local network in the telecommunications sector,” the government said.

“The aim of the procedure is to investigate the commission of relative monopolistic practices that have or may have as their object or effect, to unduly displace other economic actors, substantially impede their access, or to establish exclusive advantages in favor of one or more economic agents in the relevant market, or in a related market,” it added. 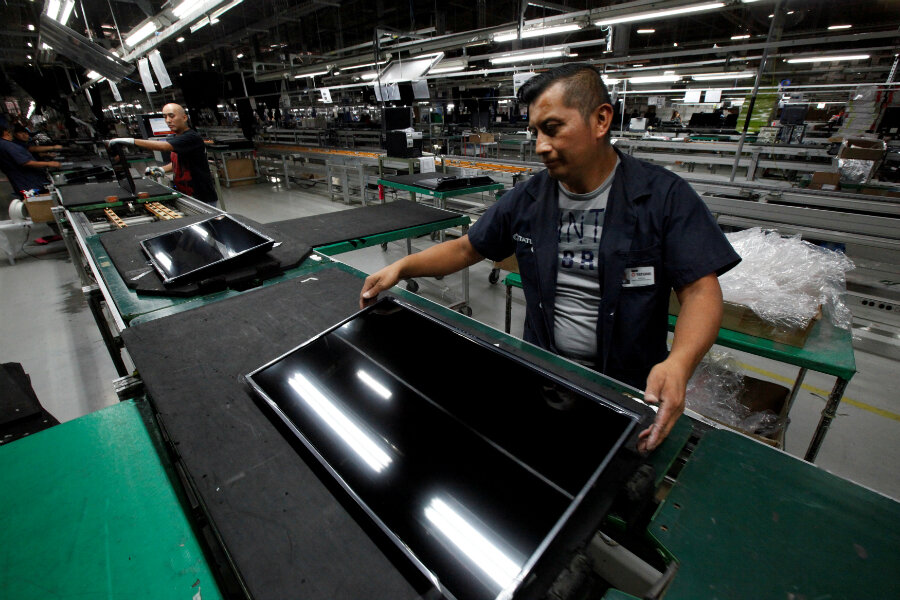 Gross domestic product, a measure of output in goods and services, was down 0.2% seasonally adjusted from the previous quarter, the National Statistics Institute said Friday. Industrial production fell 0.3% and services grew 0.2%, while agricultural production was 2.1% lower.

The revised result, which translates into an annualized contraction of 0.6%, was below the preliminary estimate published last month when the institute reported a 0.3% annualized decline in GDP.

“It’s not as bad as it looks,” said Bill Adams, senior economist at PNC Financial Services Group. “The drop in GDP in the second quarter is payback after good growth in the first quarter of 2018 and the fourth quarter of 2017.”

Wind energy is closely related to a myriad number of pressing social, political, and economic concerns. “Mexico has already set ambitious targets for renewable energy, stipulating that green power must make up 35 percent of the country’s generation by 2026,” reported The Financial Times in late 2014. However, it was only in 2009 that the industry itself began to pick up speed. As one report explained that year, “After years of spinning wheels, renewables in Mexico are ready to forge ahead.” Former President Felipe Calderón, two years into his six-year term, positioned his own political legacy firmly alongside the future of renewable energy. While prior to 2006, the renewable energy industry was at a standstill “aside from large hydropower construction,” it was with the backing of Calderón that the industry really picked up steam. Impediments to growth included the “federal power utility” the Comisión Federal de Electricidad which translates as the Federal Electricity Commission (hereafter will be referenced by its Spanish acronym CFE) which “seemed less than interested in competition from independent power producers, such as wind farms,” as well as a “renewable energy law” that “lingered in the national assembly for more than three years…leaving the country without a comprehensive legal framework to encourage renewables investment.”

Today, wind energy technology has evolved. The Mexican wind energy sector is expanding with parks popping up across the country. While many see the growth of wind energy as the inevitable next step in a progressive approach to green economic development, it will only succeed if and when the social and the natural landscapes of new projects are considered in concert. This paper is a case study in the social and historical context of wind energy development in southern Mexico. The paper argues that wind energy on the Isthmus of Tehuantepec has produced far more than mere electricity. Like other kinds of large-scale energy or infrastructure projects, the arrival of wind turbines also brings worldviews into conversation. Windenergy projects and developers identify nature as a resource for human use while many residents of the Isthmus of Tehuantepec see their windy world through quite a different lens. While difficult to pin-down, istmeños have engaged with the land in productive partnership that carries with both their history and spiritual qualities. In order to dispel current tensions and rectify mistakes made in the path forward, a critical rethinking of this kind of sustainable development is urgently needed.

The Wilson Center’s Urban Sustainability Laboratory and Mexico Institute, along with the Federal Reserve Bank of Dallas, are pleased to invite you to the event, “Innovation in Colonias on the Texas-Mexico Border: Building on Border Assets.” While public discussion often focuses on the challenges facing low-income communities living on both sides of the U.S.-Mexico border, the region’s assets can be leveraged to advance local economic development. A panel of experts will discuss opportunities to promote  development, entrepreneurship and job creation for the colonia populations living along the border. Panelists will discuss how policies for affordable housing, infrastructure, education, workforce development, entrepreneurship, and health can be integrated with efforts to build an inclusive economy and strong community networks and cooperation. On-the-ground innovation in the border region and in the colonias offers important new models for development in underserved communities.

A recent report by the Federal Reserve Bank of Dallas, “Las Colonias in the 21st Century: Progress Along the Texas-Mexico Border”, provides context for the discussion. Texas colonias, home to an estimated 500,000 people, represent one of the largest concentrations of poverty in the U.S. This report offers a comprehensive profile of Texas border colonias, assessing the opportunities, successes, and challenges facing these communities.

Lawmakers  voted to permit urban and suburban development in the agricultural heart of northwestern Mexico, the Guadalupe Valley, despite angry opposition from those who have spent decades making it an international destination for wine, food and quiet.

Municipal council members argue that the new zoning regulations will preserve the valley and increase property values, spreading out the benefits of a boom. But the new rules subvert the state-approved regional plan they were supposed to clarify by allowing up to 10 times as much housing density while significantly weakening public oversight. Independent scientists say the arid valley simply cannot sustain the intensified development, creating what many here see as a threat to a national treasure and a vital test of Mexico’s young democracy.

This article analyses one of the causes of migration in rural Mexico through the lens of US foreign assistance policy. US aid to Mexico – the largest migrant-sending country to the USA by far – does not sufficiently take into account the conditions of rural under-development and joblessness that encourage unauthorised migration to the USA. Instead US foreign assistance has been dominated by aid to Mexico’s security agencies. This article analyses how the link between rural underdevelopment and migration-pressures has not been successfully addressed by either the Mexican or US governments. The article also analyses an innovative development project that explicitly seeks to support campesinos with the goal of reducing unauthorised migration pressures in a traditional migrant-sending rural region of Mexico.