Billionaire Slim, 79, “wants to end his business life by contributing to economic growth and well-being during this administration”, the president said, adding he might be committing an “indiscretion” by revealing his plans, he said during his morning presser Tuesday.

Slim spokesman Arturo Elias Ayub said in a tweet that the billionaire and the president talked about how they both have nearly six years of intense work ahead of them to boost the country due to Lopez Obrador’s term and Slim’s age.

Slim’s $56.6 billion empire includes America Movil SAB, the largest mobile-phone operator in Latin America, and holdings in banking and mining. He also has stakes in publicly traded companies like The New York Times. Through Grupo Carso, he also has interests in the Mexican construction company and was heavily invested in the now-canceled $13 billion Mexico City airport.

Mexican tycoon Carlos Slim said on Tuesday that the best wall between Mexico and the United States was investment and job opportunities, referring to the U.S. President Donald Trump’s promise to build a border fence between the two countries.

“The best wall is investment and creating opportunities in Mexico,” Slim said during an strategy conference for the Spanish builder FCC (FCC.MC), of which he is the main shareholder, in Madrid.

Slim also noted that the United States and Central American countries need to make deals on investment and not just for trade.

Billionaire Carlos Slim has had harsh words for Mexico’s presidential frontrunner, saying recently he is “concerned and afraid” about what leftist Andres Manuel Lopez Obrador might do if elected.

But a victory by Lopez Obrador, who holds a double-digit lead in most polls before the July 1 vote, could provide upside for Slim’s fortunes, particularly with regard to his America Movil (AMXL.MX) telecommunications empire, Reuters interviews with a dozen close friends, partners and other people familiar with their dealings show.

That is because Slim’s company, which possesses the largest network in Mexico, could play a key role in delivering cell coverage to rural areas but complains current regulations hold it back.

Mexico’s small and medium entrepreneurs called on billionaire Carlos Slim Helú, among others, to explain how a proposed $13 billion new airport project for Mexico City would benefit them. Alejandro Salcedo Pacheco, President of the Latin American Association of Micro, Small and Medium Businessmen, asked for a non-partisan joint review of the controversial project, Mexican press reported.

Salcedo Pacheco–who leads an organization that claims to have over 4 million affiliates–said that the airport, “like many other large projects built under the current administration, is an example of the corruption that prevails in the federal government and the conflict of interest incurred by big businessmen.”

Speaking at a news conference, Slim strongly defended the $9.2 billion project, in which his companies have won major contracts.

Lopez Obrador, who is the front-runner in preference polls, has called the project too costly and is pledging to cancel it if he wins the July 1 presidential vote. He says the soil at the site of the project is prone to sinking and flooding. 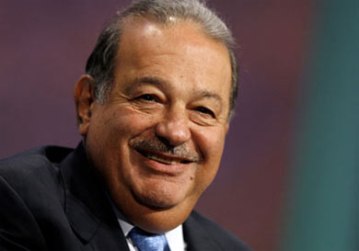 Mexican billionaire Carlos Slim said on Thursday that if President-elect Donald Trump succeeds in office, it will be good news for Mexico, and that he would be more worried as an American than a Mexican about the next U.S. government. Slim, a telecoms tycoon who spent several years as the world’s richest man, says he has never met Trump, but the two businessmen traded barbs during a bruising U.S. election campaign in which Trump vowed to build a wall along the southern border to keep out Mexican immigrants

But Slim added that Trump’s potential success would also be Mexico’s, arguing that a 4 percent U.S. growth rate and the creation of millions of jobs would benefit Latin America’s second biggest economy.

Carso Infraestructura y Construccion, part of Slim’s Grupo Carso, is hashing out a deal to form the consortium, which would include three other Mexican companies – all its partners from a winning bid for one of the airport’s runways, four of the people said in recent days, speaking on condition of anonymity.

The bid for the terminal, hot on the heels of Carso’s runway bid, shows how Slim, Mexico’s wealthiest man, is aggressively moving to boost his construction business as his telecoms arm America Movil is squeezed by increased competition and regulation.

One of the companies at the center of the investigation used to be a state monopoly.

Mexico’s telecoms regulator has opened an anti-trust probe into the domestic market for public telephones, the government said in its official gazette on Tuesday.

The investigation will look at possible anti-competitive behavior in the “market for production, distribution, and commercialization of public telephone service for sale to final users via telephonic apparatuses for public use,” it said.

Blame it on Mexicans and Mexico, again.

Republican presidential candidate Donald Trump suggested Mexican billionaire Carlos Slim was involved in the publication of New York Times articles about women who have come out and alleged Trump made unwanted sexual advances.

“The largest shareholder in the Times is Carlos Slim. Now Carlos Slim, as you know, comes from Mexico,” he said Friday. “He’s given many millions of dollars to the Clintons and their initiative. So Carlos Slim, largest donor of the paper, from Mexico.”

MEXICO CITY — All is not well in the kingdom of Carlos Slim.

For more than 25 years, he has dictated the terms of Mexico’s telecommunications industry and built an empire, making him one of the world’s richest men.