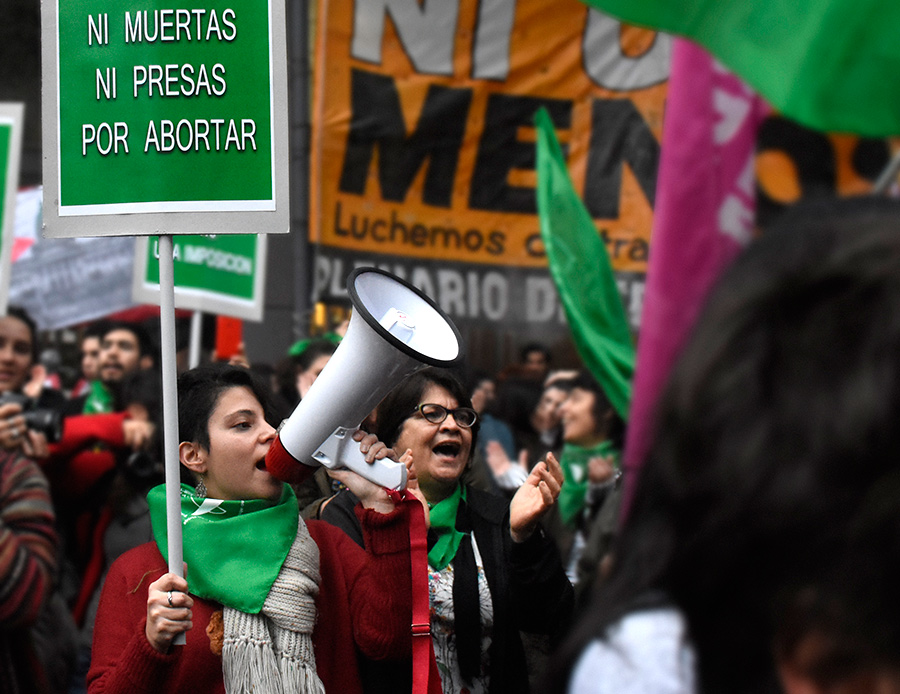 Thousands of women demonstrated in several Latin American cities on Tuesday to commemorate the global day of action for access to safe and legal abortion, in a region where the procedure is fully permitted only in a handful of countries.

In Mexico City, women marched to the historic center under the gaze of police with shields and riot helmets. Authorities put up protective fences on some major buildings and monuments that in the past have been spray-painted during demonstrations.

The ground literally shook on the day the Mexican Supreme Court decriminalized abortion: On September 7, a 7.0 magnitude earthquake struck the Mexican Pacific coast, rocking several states and killing one person.

It lasted about a minute. But the shockwaves sent across the region by the court’s abortion ruling will be felt for years to come.

As soon as the nurse found out that she had an abortion at home, Fernanda García knew she was in danger. The nurse began yelling that she was a criminal, that what she had done was wrong, that she would be sent to jail.

“She told me that they were going to report me, that I was going to face charges,” said Ms. García, who went to the hospital last month after experiencing pain and bleeding. “I’ve never felt so scared in my life.”

When the Supreme Court in Mexico issued a historic decision on Tuesday declaring that having an abortion was not a crime, activists across the country celebrated. On Wednesday, they got back to work, taking on the long and arduous process of ensuring that the legal shift applies across Mexico.

Among their top priorities are helping the women who need it most: those facing criminal penalties, often after having been reported to the authorities for trying to induce an abortion themselves under dangerous conditions.

MEXICO CITY — Mexico’s southeastern state of Veracruz will become the fourth state in the predominantly Roman Catholic country to clear away criminal penalties for elective abortion after lawmakers on Tuesday voted to decriminalize the procedure.

The initiative to allow abortions by choice passed in a 25-13 vote with one abstention, Veracruz’s Congress said in a statement.

The Mexican state of Oaxaca on Wednesday approved a bill to legalize abortion, making it only the second region of the predominantly Roman Catholic country after Mexico City to permit the procedure.

Amid raucous shouts of protest from opponents, the local Congress voted by 24 lawmakers in favor to 10 against to allow abortions during the first 12 weeks of pregnancy in Oaxaca, a southern state that has long been among Mexico’s poorest.

Criminalization of women who interrupted their pregnancy increased after state reforms that protect life from conception were passed.

Overall 679 Mexican women were denounced for  committing abortion between 2009 and 2011.

Both amendments severely restrict abortions, with exceptions like rape or danger to a mother’s life. Mexico City is the only part of the country that has legalized abortion in the first trimester.

The ruling appeared to allow Mexican states to decide individually on the abortion question, though the court has also agreed to review a similar amendment from the north-central state of San Luis Potosi.

Sixteen of Mexico’s 31 states have adopted right-to-life amendments that severely restrict abortions, though almost all continue to allow it under some circumstances like rape or danger to a mother’s life. Only Mexico City has legalized abortion on demand in the first trimester.