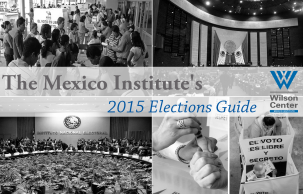 On June 7th 2015, Mexicans will take to the polls to elect a new cohort of federal deputies. This new generation of politicians will be the first deputies who are eligible for re-election since the Porfiriato system broke apart with the Mexican revolution.   In 2018, federal legislators will be allowed to stand for re-election for up to a total of 12 years, providing a unique opportunity to build caucuses within the congress and hopefully develop a more professional legislative support staff.

In addition to the 500 federal deputies, Mexico will elect 17 state-level legislatures, 9 governors, and more than 300 mayors. This year´s election is also, of course, a litmus test of public opinion regarding the PRI government of President Enrique Peña Nieto. Much has been made of the President´s low public approval rating, but his party remains the most popular in the eyes of the Mexican electorate, with around 32% in a recent poll. If one adds in the support for the PRI´s coalition partner Green Party, that figure quickly approaches 40%, potentially sufficient to give the governing coalition another majority in the Chamber of Deputies.

The Wilson Center´s Mexico Institute is marking this historic election by launching a new web resource that brings the latest polling numbers, analysis and opinion to our readers. The Mexico Institute’s 2015 Elections Guide will be updated daily and will provide a one-stop shop for English language information on the vote.

We hope you enjoy the new resource, and please send us your comments and suggestions so that we can improve the service.